Skip to content
You are here:HomeBlogging just to blog. Amazon Year in Review: 2013 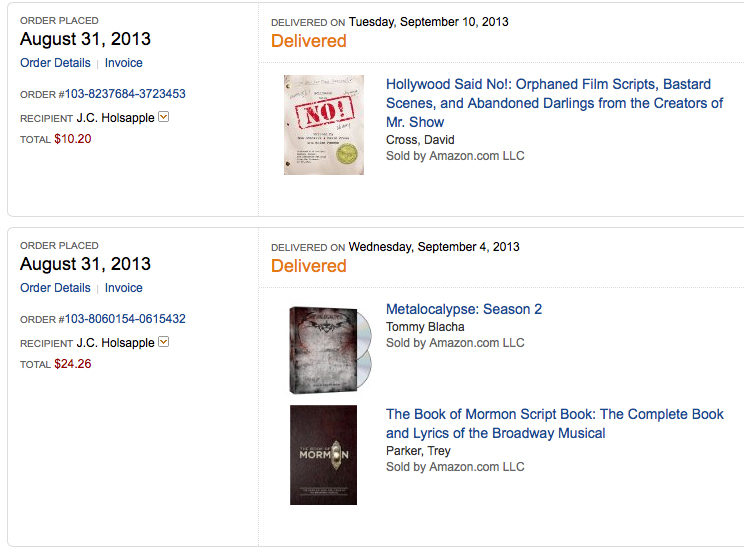 I saw another blog do this and found it to be interesting. Everything I bought on Amazon in 2013. 77 orders total. Yes, I am a Prime member and I highly recommend it. I had multiple orders on certain days so I just combined them into one day here.

January 26, 2013
Sterling Silver Black and White Round Diamond Heart Pendant
Gift for the wife. She seems to like it which is all that matters.
Grade: A+

January takeaway: Good month for me. Only one movie and a gift for my wife.

February 1, 2013
Lady and the Tramp (Diamond Edition Two-Disc Blu-ray/DVD Combo in Blu-ray Packaging)
Had to pick this up before it went into the vault. Don’t necessarily care for the movie but got to have all the Diamond editions.
Grade: C

February 9, 2013
Klown [Blu-ray]
My favorite comedy of 2012.
Grade: A
The Perks of Being a Wallflower [Blu-ray]
Great movie.
Grade: B+
Apocalypse Now (Three-Disc Full Disclosure Edition) [Blu-ray]
I hadn’t seen this movie and it was cheap so I grabbed it. Still haven’t watched it.
Grade: B

February 11, 2013
Infantino Compact 2-in-1 Shopping Cart Cover
Baby Einstein Neptune Ocean Adventure Gym
Gifts for my brothers child. No idea if they ever got used.
Grade: A (Cuz his kid is cute.)

February 16, 2013
4 of DAX Solid Wood Photo/Document Frame, Easel Back, 8.5 x 11 Inches, Black (1826N3T)
To frame some prints for kids rooms.
Grade: A (Because the prints look great in them.)
The Dark Knight Rises (Blu-ray/DVD Combo+UltraViolet Digital Copy)
Didn’t totally enjoy this film but I had the first two so felt like I had to own it.
Grade: C
ClosetMaid 805331 Tie & Belt Rack, Chrome
I love this rack. It works great.
Grade: A

February 27, 2013
Children of Men [Blu-ray]
Felt like I needed to watch this one again because I loved it when it came out. Still haven’t watched it.
Grade: C+
ELAGO Slim Fit Case for iPhone 4/4S
Wife used this case for quite a while making it a worthy purchase.
Grade: A
Case-FX Flex Cube Case for iPhone 3G / 3GS (Electric Lime)
Got this case for my kid. She used it for maybe 22 minutes.
Grade: F

February 28, 2013
Kenneth Cole Men’s Peacoat With Bib Outerwear, Black
Amazon had coats for 75% off. This one was $50. It’s a great looking coat and I love it.
Grade: A+
100% Acrylic Men’s Fashion Classic Colorful Stripes Cap Hat Scarf Set – Gray
Matching gloves/hat for the new coat. Overpaid for them but style matters.
Grade: C

March 10, 2013
Who Framed Roger Rabbit: 25th Anniversary Edition (Two-Disc Blu-ray/DVD Combo in Blu-ray Packaging)
Got this one for $17 and it’s $20 right now on Amazon so still a good buy for a silly movie from my childhood.
Grade: B+

March 17, 2013
LEGO Friends Olivia’s House
The most expensive Lego Friends for my daughter’s B-Day. She put it together and then forgot about it I’m relatively sure.
Grade: C

March takeaway: A movie a week average. Slow down J.C.

April 7, 2013
Xbox 360 Wireless Controller Blue
Overpaid to get the blue controller. It came from China and the left trigger didn’t work.
Grade: F

April 16, 2013
Mafioso (The Criterion Collection)
Criterion announced this one was going Out of Print so I had to get it before it tripled price. Hate paying higher retail prices for DVDs but I hate even more paying higher than retail.
Grade: B

April 23, 2013
Pilot EasyTouch Retractable Ballpoint Pens, Black Ink, 12-Count
Wife needed pens. She is a pen nazi. She likes these ones so I guess worth it!
Grade: A

April Takeaway: 3 Orders. That’s more your style. Stick with it.

May 28, 2013
Intex Krystal Clear 15-Foot Solar Pool Cover
Paid $31 for this pool cover and it rarely got warm enough to even swim.
Grade: C
LITTLE BOY’S HOODED PONCHO TOWEL BEACH POOL BATHROBE 100% COTTON
Got this for a nephew, no idea if they used.
Grade: S

May Takeaway: 2 Orders. You went down to 2 this month. Awesome job, J.C.

June 7, 2013
AeroPress Coffee and Espresso Maker
This thing has revolutionized the way I make my iced Mocha’s.
Grade: A+

June Takeaway: Only 3 orders but they were pricey. Still, good on you J.C. for keeping it at 3 orders.

July 10, 2013
Cuisinart ICE-30BC Pure Indulgence 2-Quart Automatic Frozen Yogurt, Sorbet, and Ice Cream Maker
My wife makes me the best God Damn cheesecake ice cream in this thing that I got her for her B-Day.
Grade: A for me. probably not as high for her since she is the one doing the work.
Jerdon 8-Inch Two-Sided Swivel Wall Mount Mirror
Another B-Day present for my wife. I actually got her 2 of these because I had Credit Card points. This one is still in the box though since she prefers the other one.
Grade: F

July 18, 2013
Fitbit One Wireless Activity Plus Sleep Tracker, Black
Another B-Day present for the wife. She wears this thing ALL THE TIME. Good get, J.C.
Grade: A

July Takeaway: Only 2 orders and they were all for Stefanie. Excellent work, sir.

August 10, 2013
Duracell Coppertop Duralock AA Batteries 34 Count for $14
This was an insane deal and we still have this pack. Maybe the best buy of the year in terms of value.
Grade: A+

August 11, 2013
The Faculty [Blu-ray]
I’ve wanted this movie for so long.
Grade: B (Since I haven’t watched it since I bought it.)
Super Pet Squeaky Clean Critter Shampoo 8-Ounce
Shampoo for my daughters guinea pigs that we got rid of because she grew bored of them.
Grade: F (Maybe a D since at least we kept them clean.)

August 30, 2013
PUMA OSU JRS Sneaker Cabaret/Pink/Fluorescent Blue,3.5 M US Big Kid
Kiara’s loves these shoes.
Grade: A
Michael Antonio Women’s Loveme-Pat3 Pump,Teal,7 M US
I don’t even know if Stefanie ever wore these or if we returned them.
Grade: D

August 31, 2013
The Book of Mormon Script Book: The Complete Book and Lyrics of the Broadway Musical
Loved the musical and had a great night with my wife so this is a good reminder of that night.
Grade: B+
Metalocalypse: Season 2
I missed most of this show when it aired so I was going to catch up and then I never did.
Grade: D
Hollywood Said No!: Orphaned Film Scripts, Bastard Scenes, and Abandoned Darlings from the Creators of Mr. Show
Un-Produced scripts from my favorite Stand-Up comedian. Unfortunately they aren’t very good but still really cool to have!
Grade: B

August Takeaway: Some good buys and some very poor buys. Be smarter with your money idiot and chill out, you had 6 orders this month, that’s the last 2 months combined!

September 22, 2013
The Great Gatsby (Blu-ray 3D + Blu-ray + DVD + UltraViolet Combo Pack)
Loved this movie and the 3D is perfect.
Grade: A
Pandamimi ULAK Colorful PU Leather Wallet Type Magnet Design Flip Case Cover for IPhone 4 4G 4S
Yet another phone case that didn’t get the use it was intended. How many of these GD things do I have to buy before I just tell them no!
Grade: D
Brita Hard Sided Water Filter Bottle, Blue
Wife still uses this regularly. Totally worth it.
Grade: A

September Takeaway: One order? What in the world? Did you sleep thru the month of September, J.C.? Future J.C. is so proud of you. Let’s keep it up for October, ok?

October 1, 2013
Japanese Chopsticks Gift Set (Rice Paddle Included)
Random thing my wife had on her wish list.
Grade: B (because it’s like I’m a kid playing house when I try to use them)
The Little Mermaid (Three-Disc Diamond Edition) (Blu-ray 3D / Blu-ray / DVD + Digital Copy)
Another movie I’m not crazy about but have to get all the Disney for my kids.
Grade: B (Disney charges way too much for their old movies)
E.l.f. Cosmetics 12 Piece Brush Set
More stuff for the wife. I assume she uses them.
Grade: B
October 2, 2013
The Wizard of Oz: 75th Anniversary Edition (Blu-ray 3D / Blu-ray / UltraViolet)
A classic movie.
Grade: A-
Hoover WindTunnel T-Series Rewind Upright Vacuum, Bagless, UH70120
Our vaccuum went tits up so had to replace it. This was a great vacuum especially since we added a Husky to the house.
Grade: A+

October 18, 2013
Conair Dog Shedding Blade, Medium
Evolution W6109 Grooming Undercoat Rake with Rotating Teeth, Single Row
Dog brushes for the Husky. Then went to wal-mart and they were all cheaper there. one of the few times I overpaid on Amazon.
Grade: F
Gillette Venus Embrace Pink Razor, 1 Razor handle and 2 Womens Razor Refill Cartridges Kit
Razor for the wife and she still uses it. Win/win!
Grade: A+ (for smoothness)

October Takeaway: What the fuck? We said we were going to keep up that momentum of not spending that we created in September and then you go and have 4 orders and rack up over $200. You are a certified EEEDEOT.

November 1, 2013
Dr. Seuss’ How The Grinch Stole Christmas (Blu-ray + DVD)
Christmas movie for the kids. They watched it about 20 times.
Grade: A

November 7, 2013
DVI to HDMI Cable 6ft Male-Male
Work paid for this cable. It worked.
Grade: C (since it relates to work)

November 12, 2013
LeapFrog LeapReader Reading and Writing System, Pink
Christmas present for Penelope. She likes it.
Grade: B (Because the books for it are so expensive.)

November 28, 2013
Boynton’s Greatest Hits: Volume II (The Going to Bed Book, Horns to Toes, Opposites, But Not the Hippopotamus)
Board books for Penelope. She seems to be losing interest in these though.
Grade: C+
Pitch Perfect (Blu-ray + DVD + Digital Copy + UltraViolet)
Kiara has watched this movie 6 times in the last 2 days.
Grade: F (Because one time was enough for me.)
Seiki SE32HY10 32-Inch 720p 60Hz LED HDTV (Black)
A 32″ tv for $98 without fighting crowds. Duh.
Grade: A+
Classic Doodler With 2 Stampers, Classic Blue
Penelope really like this. I wish the stampers had ropes on them, she has lost one and the dog has chewed on the one we still have.
Grade: B

November Takeaway: Lots of Christmas presents and not much for myself. Lots of single orders on the same day but overall a good month for Christmas shopping.

December 3, 2013
VTech Sit-to-Stand Alphabet Train
Cool toy for my Brothers kid for Christmas. He enjoys it.
Grade: A
The Lion King 1 1/2 Special Edition (Two-Disc Blu-ray/DVD Combo in Blu-ray Packaging)
Birthday present for Sisters kid.
Grade: B
Seagate Expansion 1 TB USB 3.0 Portable External Hard Drive (STBX1000101)
Part of my parents Christmas present.
Grade: B (Because I didn’t get it for cheaper when they had deals.)

December 8, 2013
Lego Teenage Ninja Mutant Turtles Set #79105 Baxter Robot Rampage
Christmas present for my Sisters kid. He needed April O’Neil and she was only in this set.
Grade: A (Because it’s TMNT)

December 9, 2013
Paul Robeson: Portraits of the Artist (The Criterion Collection)
Another Criterion that went OOP that felt obliged to get before it sky rocketed in price.
Grade: C (Not one I really wanted but the OOP factor makes it a must)

December 20, 2013
WD TV Live Media Player Wi-fi 1080p
The rest of my parents Christmas present. Sad I couldn’t find a better deal on it.
Grade: A (They like it)

December 25, 2013
AmazonBasics Large DSLR Gadget Bag (Orange interior)
The camera bag that came with the camera was made for a point a shoot. This camera didn’t even fit in it with the lens on. Stupid bundle Amazon.
Grade: A for this bag. F for the original bag.

December 28, 2013
2 Gift Cards
For the Grandparents-In-Law. It’s what they had on their Christmas list.
Grade: A (They got what they wanted)

December Takeaway: Again, mostly all Christmas presents so not a bad month.

Yearly Takeaway: I bought too many movies. Otherwise I’m mostly happy with my Amazon purchases. prime continues to be a great investment especially since I get it for the college student price since I’m still taking classes.

Feels really gratifying to make the final payment on my student loan. And also to be able to say that we are debt free! Definitely couldn’t have done this without sjholsapple pushing me to save save save. Seriously… https://www.instagram.com/p/B90ZqmSJzHN/?igshid=1h6wavzki222p

First in the quarantine viewing yesterday was...

The Chicago Blackhawks defense in one picture